So, I was in China last week. It’s not really what I expected, but then my knowledge of China comes almost entirely from visiting various Chinatowns and watching martial arts movies, so I guess I wasn’t all that well prepared for a modern Asian city like Shanghai. 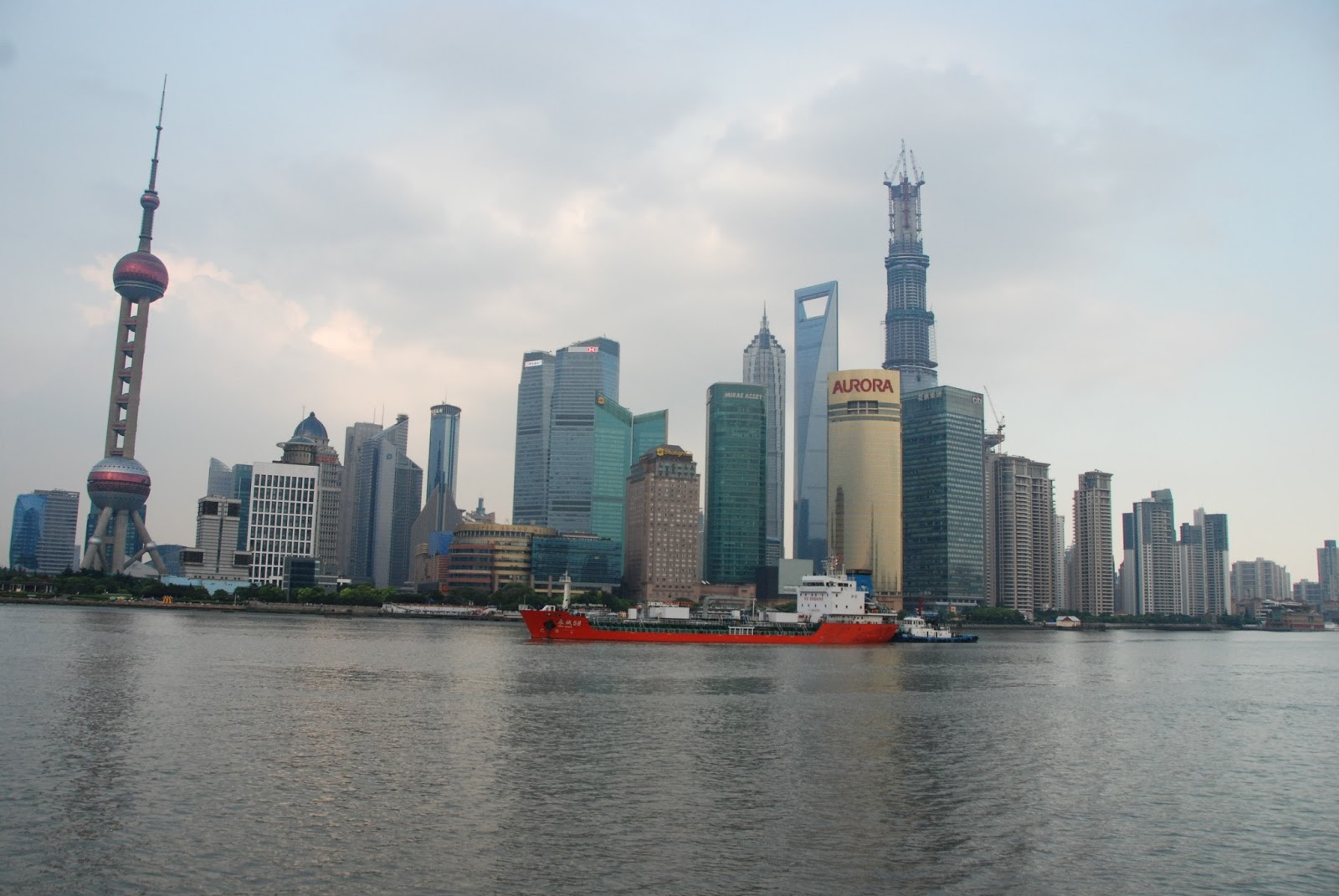 The city is, in my opinion, clean, modern, and attractive. I was surprised by American-looking early skyscrapers, and really surprised that the city overall felt more European than American - with Marks & Spencer, Tesco, Carrefour, H & M, Zara, Costa Coffee, as well as the inevitable McDonalds, KFC and Pizza Hut. 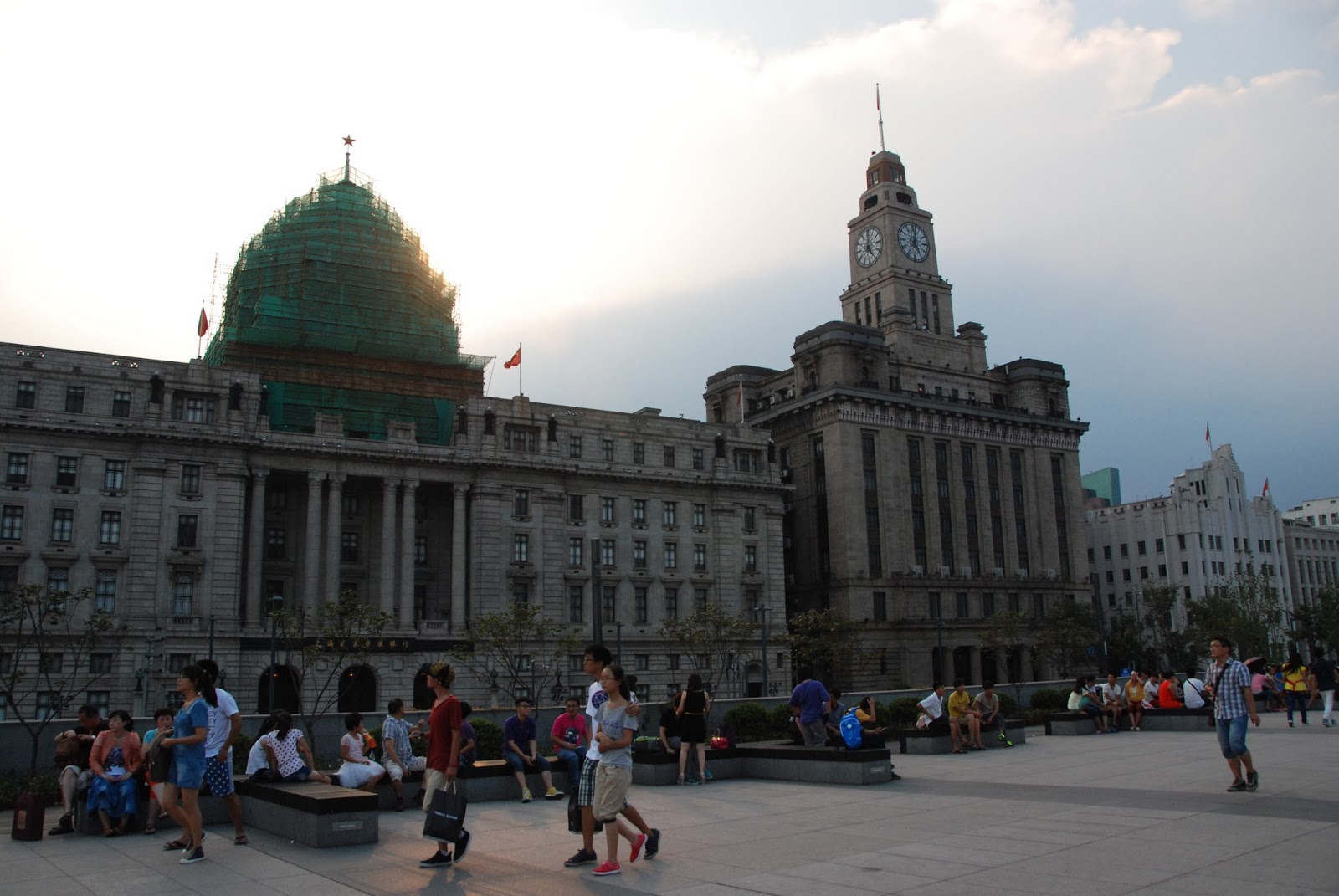 I felt like they had the option to take the best of all worlds - the modern, high tech and sometimes downright weird influence of Japan; a care for heritage from Europe; the consumer choice of the US; and food from all over China and the world. 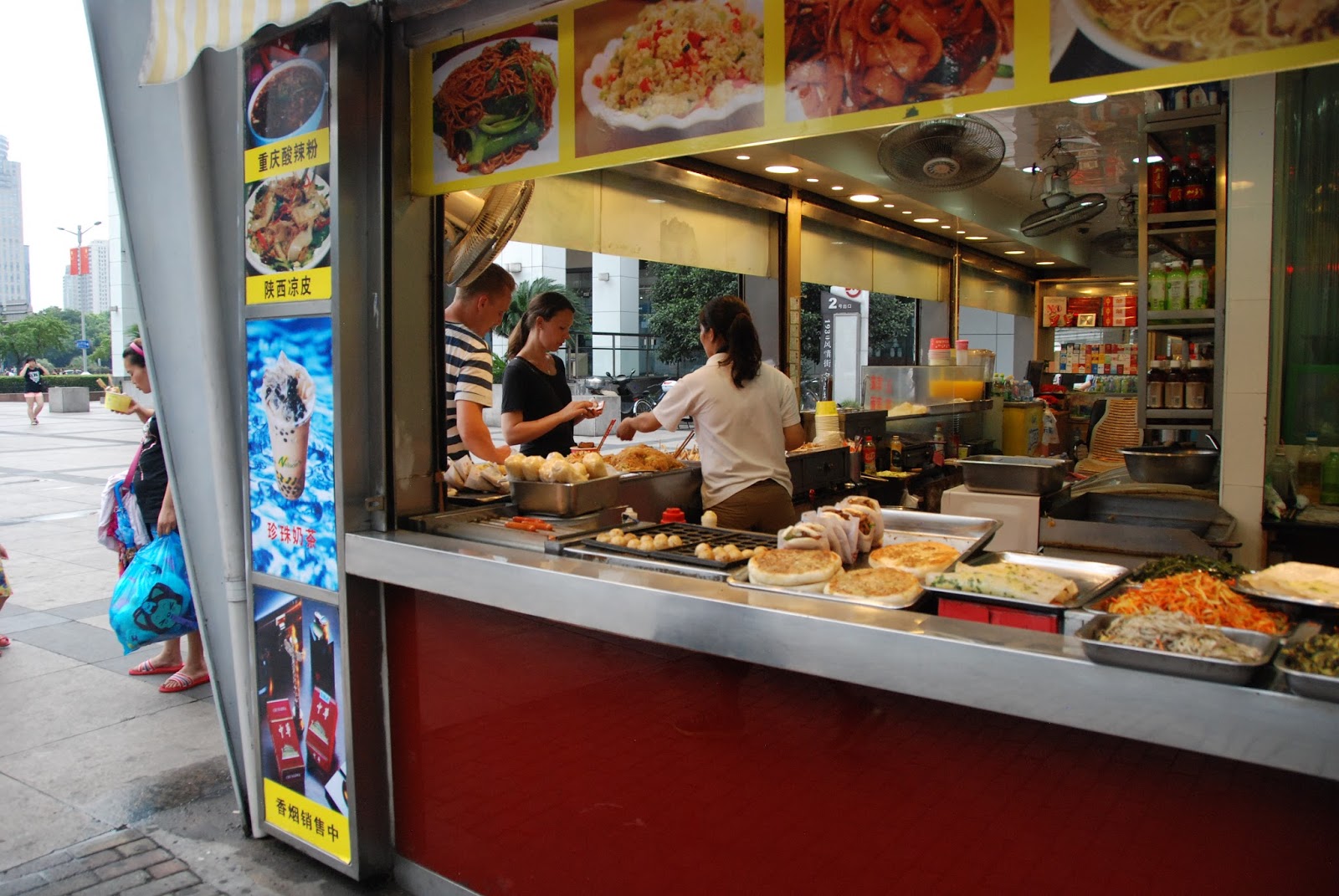 OK, I didn’t eat here, but I did love the food in Shanghai

The food was awesome and, by my London-standards, very reasonably priced. Our hotel was amazing, and also a good price for such luxury (although it was in the arse end of nowhere, but that didn’t matter when taxi journeys to the centre of Shanghai were around £3.00). Road users were mental (although there are probably many worse places I haven’t visited them yet) and we got into the habit of not looking out of the cab windows when we travelled. 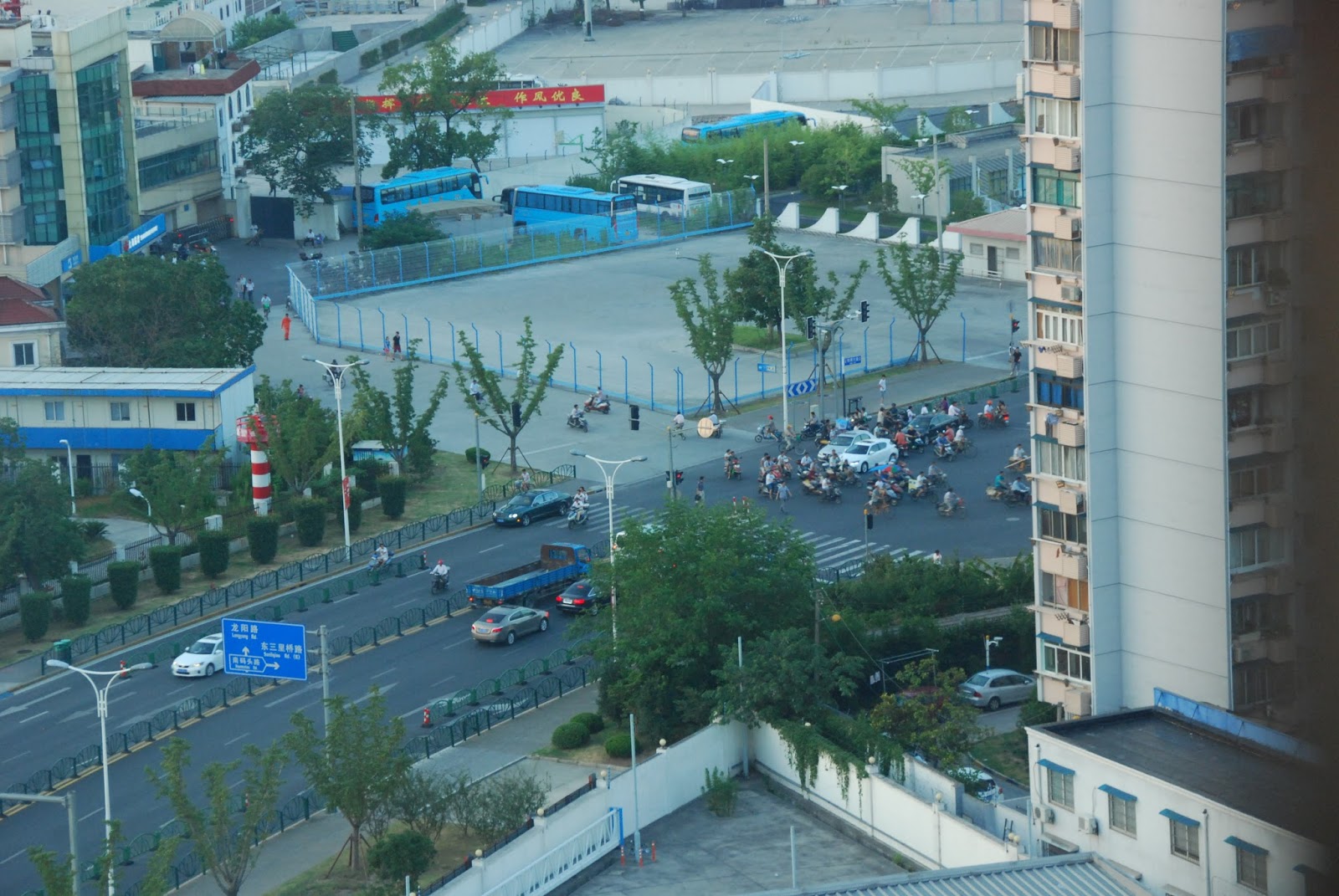 I did miss Twitter and Facebook while I was out there, and the WiFi availability was limited. Also, maybe I’m paranoid, but I wasn’t sure how much to trust the WiFi. But I found myself quite pleased to be separated from the interwebs for a bit - it was peaceful and relaxing. I even did more work than I expected, probably because I wasn’t replying to e-mails all the time or thinking of what to tweet next. 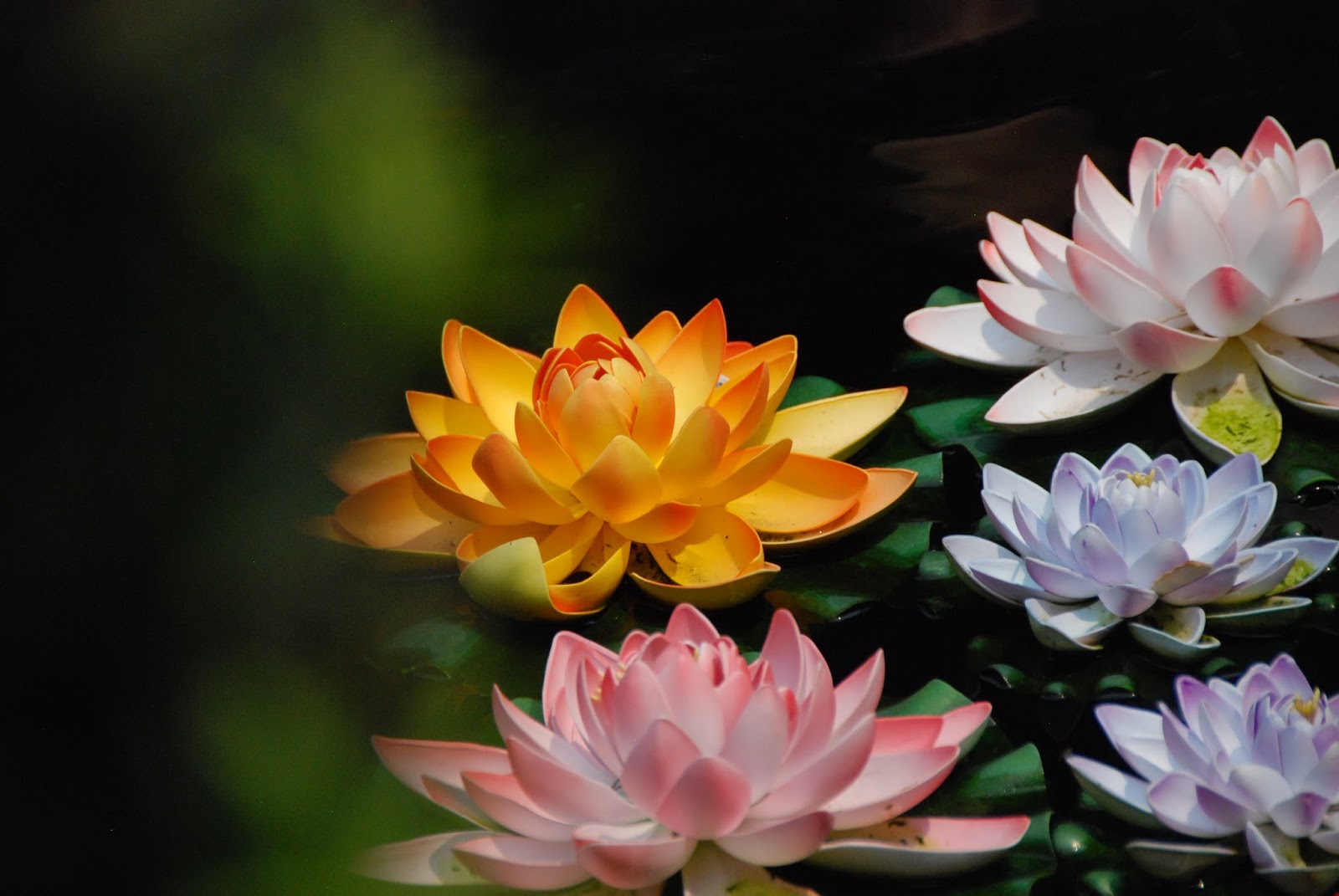 The conference itself was a weird mix of the familiar with the massively unfamiliar - familiar, because it felt like a JavaOne - the branding, the badges, the signage. Unfamiliar because I don’t speak Chinese - most of the signs and documentation were in Chinese, and not all the stewards spoke English. The attendees in particular were not expected to speak English (which is totally understandable of course! Conferences should cater for the local population), which made it more difficult to feel like a part of the event. I think I’ve mentioned before that the more I come to these events, the less I feel like an outsider as one of the rare women. But as a blonde-haired European woman I did feel a little… conspicuous. 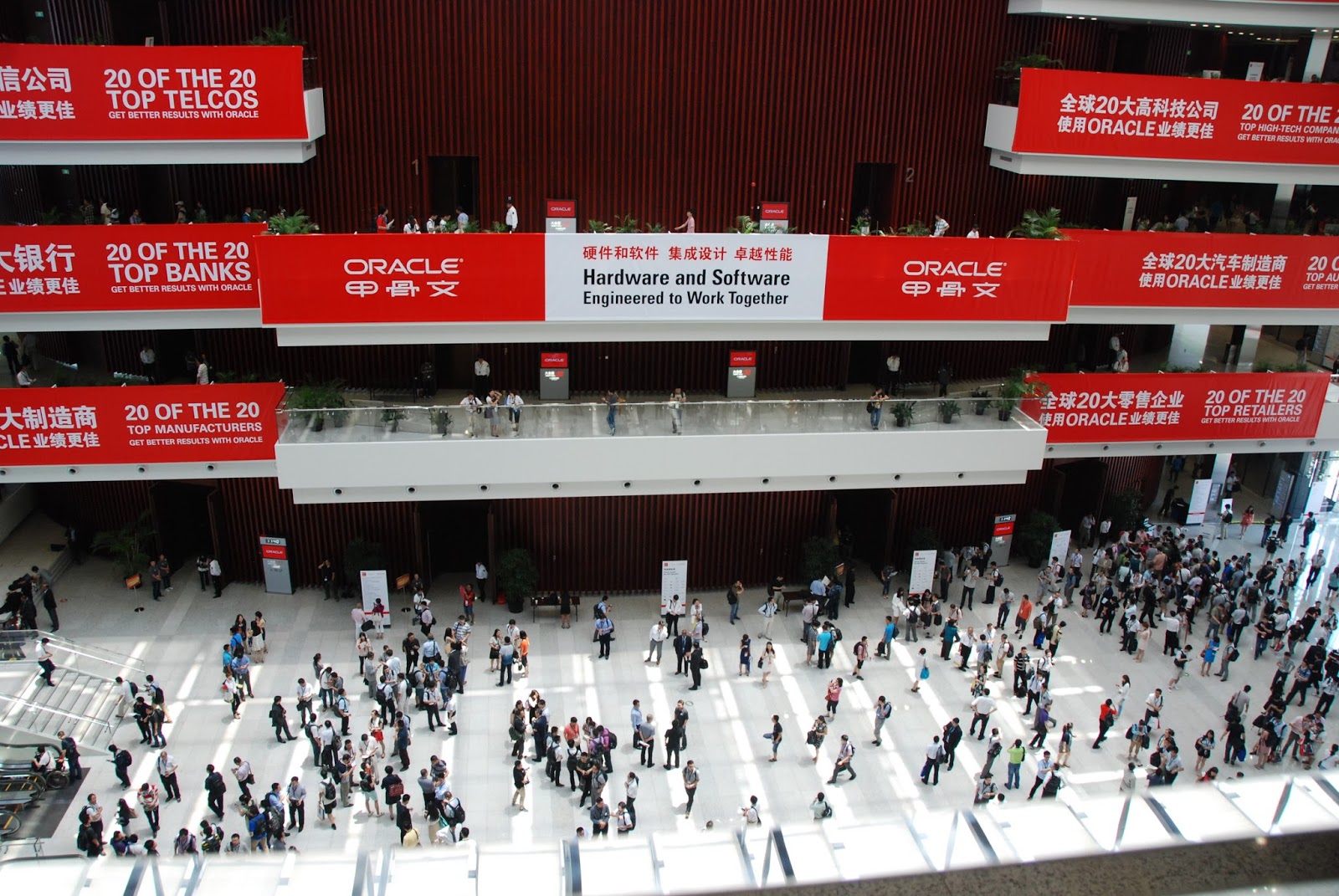 It was an Oracle conference. In case you’re not sure.

Oracle probably like the fact that the event is small enough that Open World and JavaOne can be in the same place at the same time, but to me it feels a bit odd. I couldn’t easily find the content that was applicable to me as a Java developer, and I really don’t see much crossover between the two conferences - I can’t see what I, as a developer, would get out of “How to use Oracle blah blah more effectively”. And I can’t see the suited business types enjoying “Effective Scala”.

It’s less obvious than at the SF conference(s), but there’s a very distinct difference between the JavaOne attendees (emphasis on the casual part of business casual) and the Oracle people (do they sleep in their suits?). I didn’t envy the latter at all - wearing a full suit and tie in 40°C heat and humidity you could drown in must be extremely uncomfortable. Speaking of clothes, all the women are dressed in summery, pretty clothes (except the business-suited Oracle types), and looked like normal human beings, and the geek guys were wearing less badges of geekness (geek t-shirts, jeans etc).

This did seem to be a great conference to get people from all over Asia and even the antipodes together. There was buzz in the air, an excitement to be learning stuff and meeting people. I don’t know if it’s the (relatively) small size of the conference, its youth or its geography, or maybe simply me projecting my excitement at being in a place I’d never been to before, but there was less cynicism than in the western conferences. 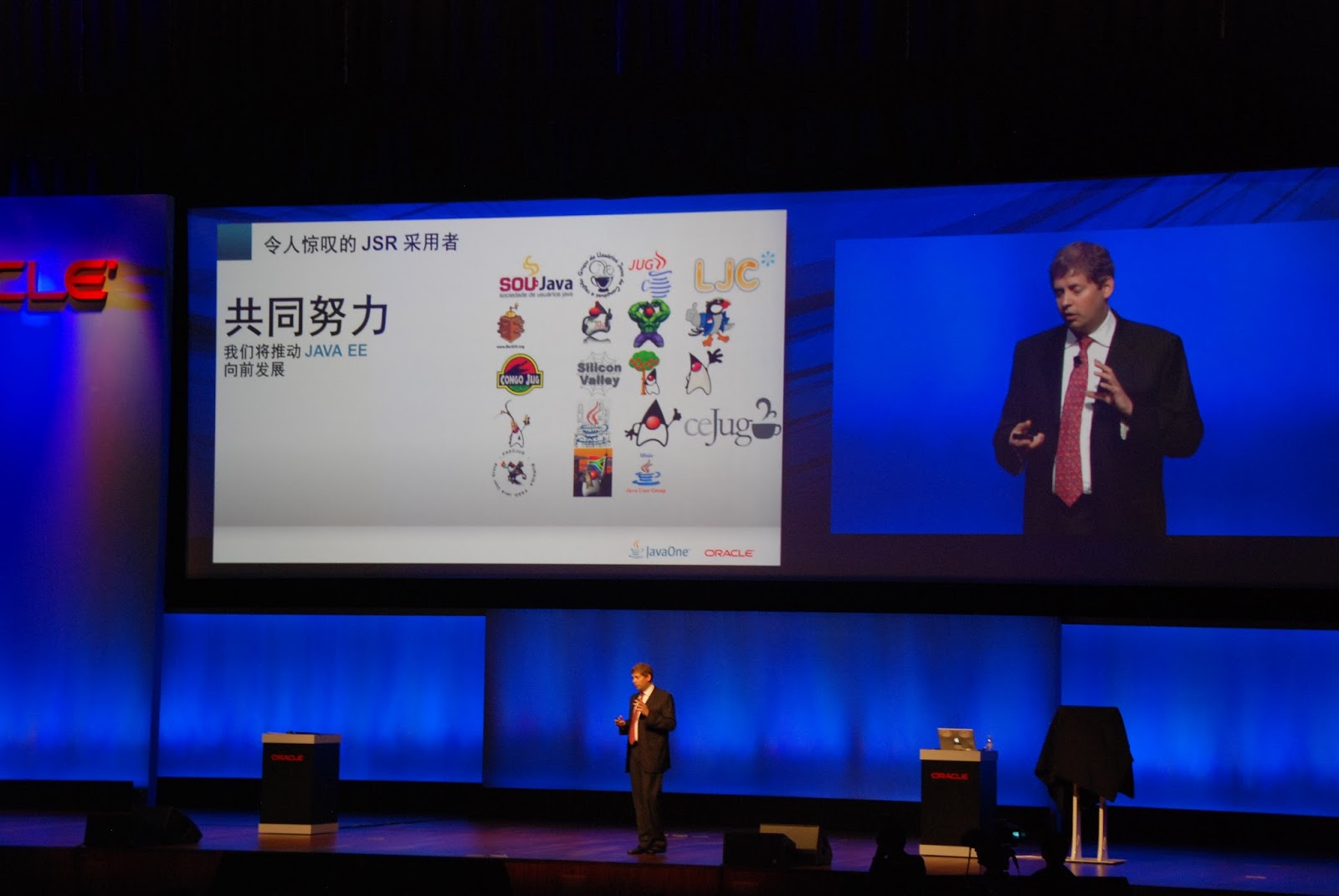 Awesome to see the LJC get a shout out in China!

In terms of presenting, this was an entirely new experience for me. The slides had all been translated into Chinese1, which I’ve already mentioned I don’t speak, so this meant I had to have my laptop out with my English notes on, as well as the slides on the main screen. I had two remotes, one in each hand, and I advanced both sets of slides at the same time. The fact that the slide on the screen was also on a monitor in front of me made it relatively easy to make sure I had both in sync, but it did require a bit of extra cognitive power. I felt lucky that most of my slides are practically content-less - if my presentations followed the Bullet-Riddled Corpse pattern a) the poor translator would have had to work harder and b) it would have been more difficult to work out which slide I was on. 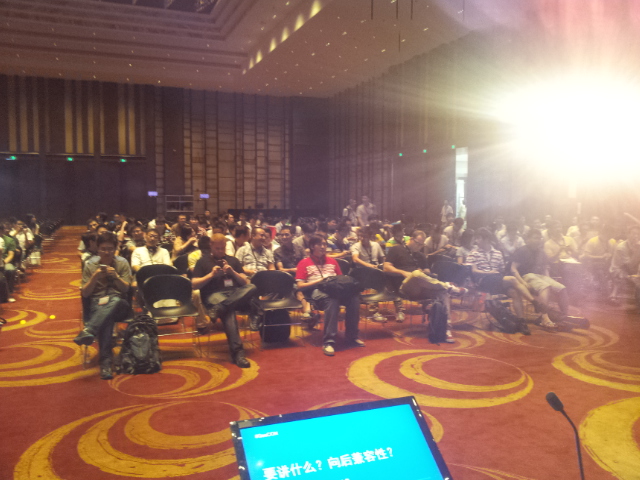 Half of my massive audience

In addition, my presentation was being interpreted in real time as I spoke. I was worried about the interpreter - I know I speak too fast, and I wasn’t sure if Chinese is one of those languages where it takes more words to say the same thing2. So I needed to make sure I slowed down, spoke clearly and coherently, and left longer pauses. These are things you should do as a presenter anyway, but it always feels a little unnatural. And in fact the more you present, the easier it is to forget this, especially if you get good feedback on your talks.

To deal with both these different things (Chinese slides and real time interpretation), I had to be prepared earlier than normal and I practiced more than normal. I wanted to get the timing right so I would be comfortable slowing down. I wanted it to be 40 minutes (in a 60 minute slot) to give me 10 mins for questions and 10 mins buffer for allowing me to slow down and/or cope with any disasters. I needed to run through with the Chinese slides so there weren’t any nasty surprises.

In the end, I thought it went very well. The preparation made me feel much more comfortable and confident. Slowing down had an additional benefit - not everyone opted for the headphones & interpreter, so me not speaking at 100 miles an hour gave them a fighting chance of following along. The audience seemed very reluctant to ask questions in public, so I skipped my usual audience-participation bit, but the fact that I hit 40 minutes exactly gave people loads of time to come up to me afterwards and ask me questions, and I did have quite a big line of people as I was packing up. I think this is a Good Thing.

Fortunately (for me) the session was not recorded in any form, so you won’t be able to see whether it really was any good or not. The slides are at the end of this blog, in case you speak Chinese (sadly my Keynote to Powerpoint conversion didn’t quite work, so some of the code falls off the bottom).

(Note that my caveats are in Chinese, but the caveats are that the new API for the MongoDB Java driver will almost definitely NOT look like that, it’s just indicative of the direction we were looking in when I wrote that presentation.)

Although I was more nervous about this session than recent sessions, I’m really pleased I did it. I highly recommend this to other speakers as a way to force you out of your routine and to think about your presentation style (something we probably all stress about anyway, but this forces you to look carefully at it).

And Shanghai overall… as you can probably gather from the start of this blog, I liked it a lot. I had a nice, mostly relaxing, fun time there. I loved the modern-ness of it, like the ridiculously fast MagLev that takes a mere 7 minutes to travel the 30km to the airport.

I liked the alienness, after countless European and American cities. I did not like not being able to speak the language, or the fact that taxi drivers don’t want to take you to the Expo area where our hotel was. I liked the many touches of familiarity and the atmosphere. I’d definitely go back. 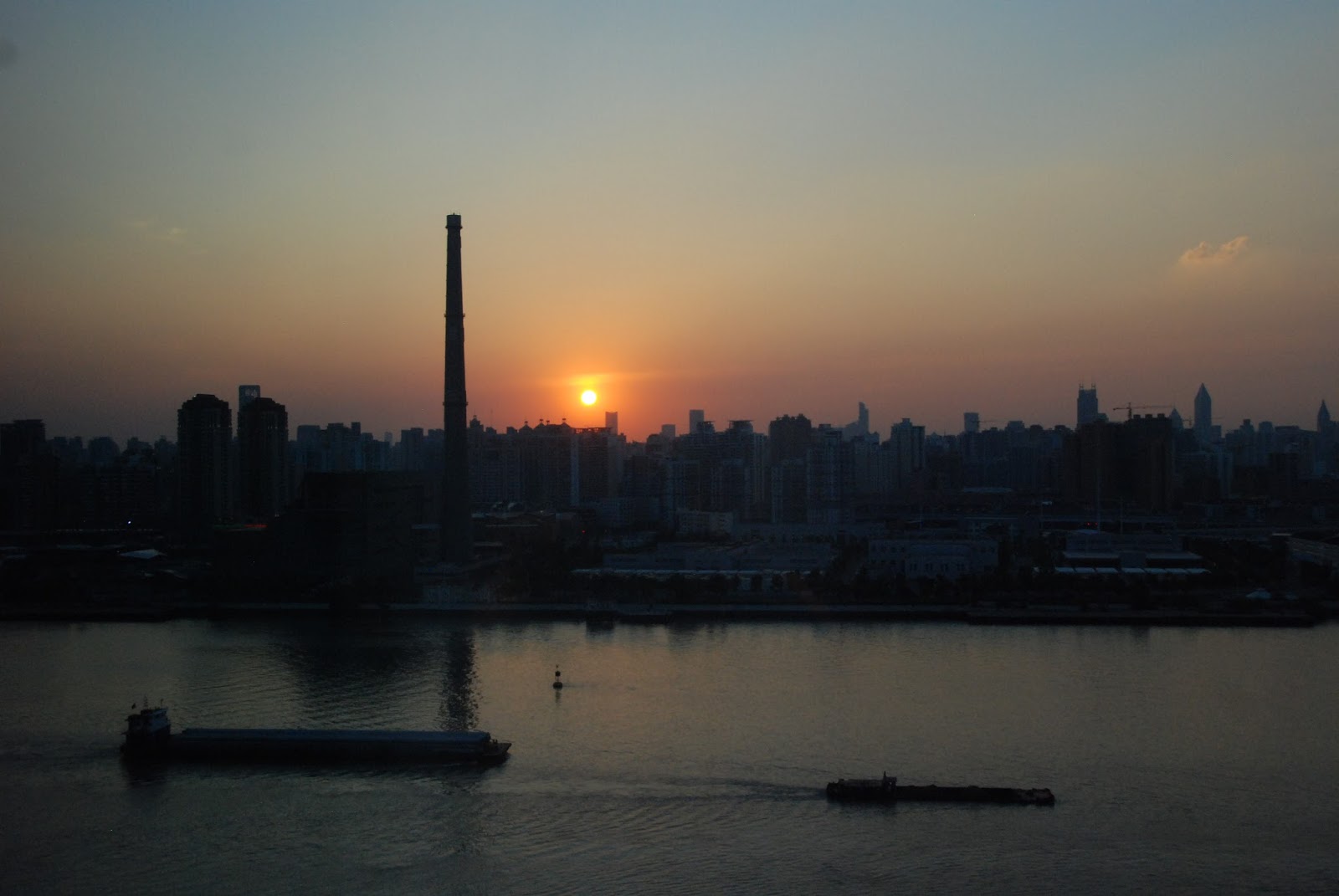 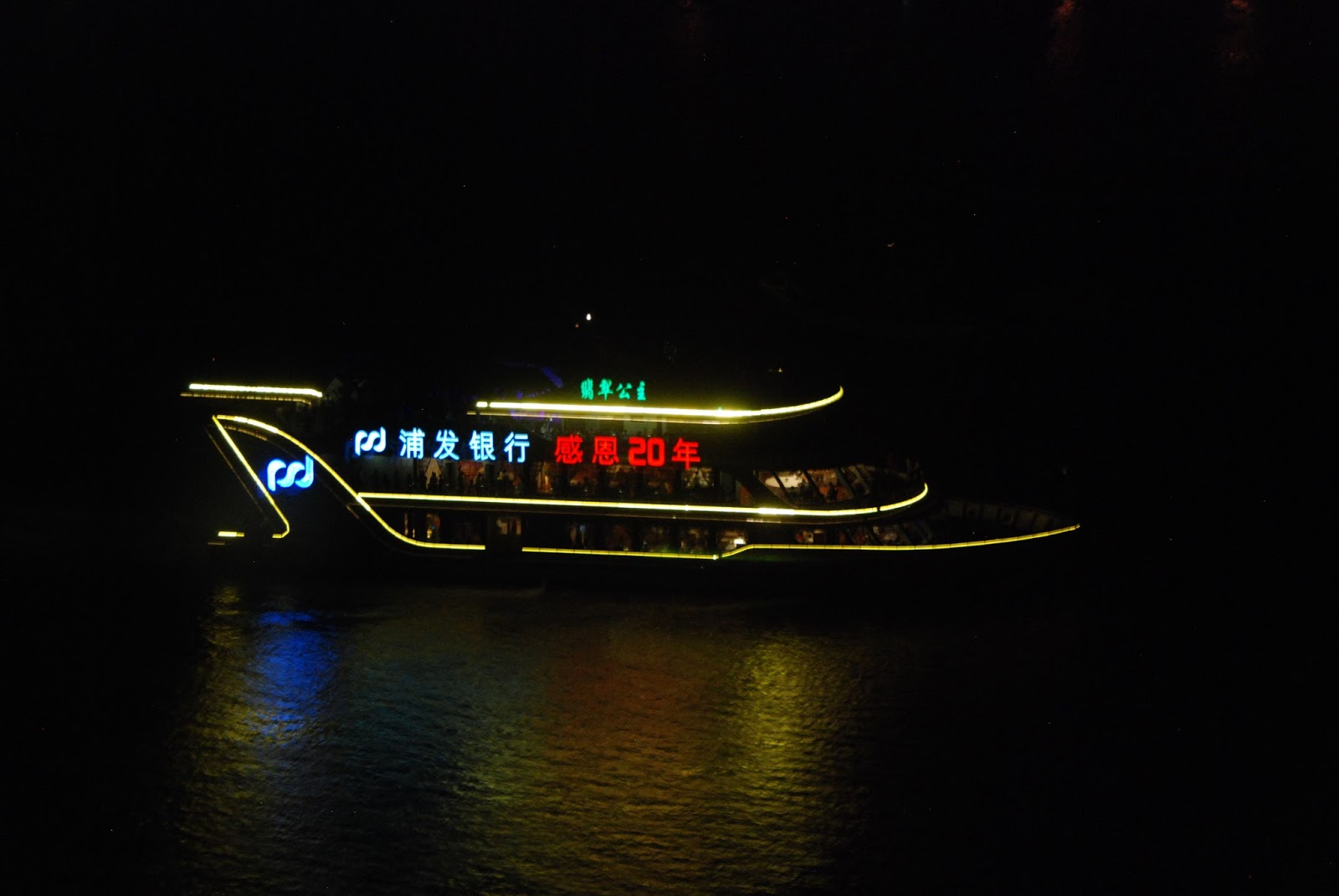 And it’s whetted my appetite for JavaOne so I’m really looking forward to San Francisco in September. See you there?

1I was surprised to hear everyone talking about “Chinese” when even in my ignorance I know there are many types of Chinese language, but doing my research I’ve learnt there is a Standard Chinese. Which makes sense. You learn something new every day

What do you mean, Backwards Compatibility? (Chinese) from Trisha Gee
comments powered by Disqus